Wowza it has been a busy summer! So before I restart real posts about cool stuff, let me do a little bit of catching up. I think I'm so far behind I didn't even get May on here, so we'll start with the kiddo's birthday party. He requested a 'marvel super hero' party, so I made some cool villain cut-outs and had the kids trap them with spider web (silly string). 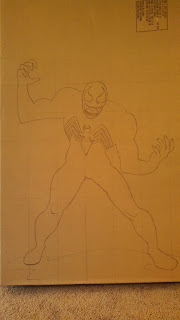 We also had several smaller ones around the yard.  Poor Venom there lost a hand in the battle!

I also made a huge Groot as a decoration piece (because I'm crazy and I had loads of time on my hands at the time). So here are a few pics of him in progress (sorry they're blurry, I was on a roll and didn't really stop to make sure the photos were good).


A few weeks later we went to the EMP to generally bop around and to see the Star Wars costume exhibit. It was AMAZING! You may have noticed, I'm a bit of a costume nut. The exhibit exceeded my expectations, and we went a few months after it opened so it wasn't crazy busy. The exhibit is touring after it leaves EMP so if it is near you, I highly recommend it. Most of the good photo's are on my hubby's camera and I haven't bothered to get them yet, but here are a couple. 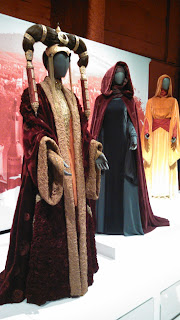 In other news, I finished my last show pre-move and made my first quilt, and tried out wet-form leather sculpting which is my new favorite thing! More on that later :)

That's all for now, but I have a few things in planning for after the big move!
Posted by Alison at 6:10 PM