Hello all and welcome to the second Sweet 16th post here!  I have something very fun and seasonally festive for you today : )  So, lets get right to it!

Today we will be making these: 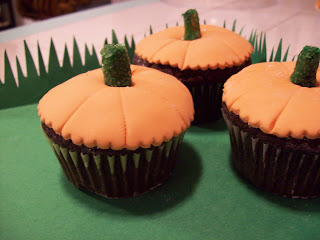 These are chocolate pumpkin cupcakes (they were originally from here but have been modified slightly by this blogger and then again by myself.)

So here we go.

For the cupcakes you will need:

To make the batter, sift (or if you're like me, just stir with a fork) together the flour, cocoa, baking powder, baking soda, cinnamon, nutmeg, clove and cardamom in a large bowl.  In another bowl stir together the pumpkin, buttermilk and vanilla and set aside. (If you plan on making pumpkin flavored frosting, set aside 3 Tbsp. of the pumpkin puree, but if not go ahead and throw it all in to the batter.)

In a mixer, beat the butter and sugars together on medium speed until fluffy.  Add the eggs one at a time, beating after each, until the mixture is light and smooth.  Alternately add the flour mix and the buttermilk mix, blending well after each. (this was my favorite part just cause it looked so dang cool!) 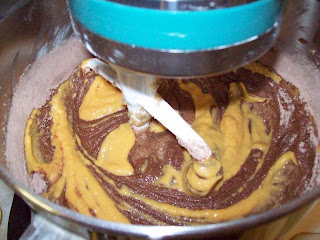 see?!  its all swirly and marbly!

anyways,  once you get everything mixed together, divide the batter into pre lined cupcake pans (about 1/4 cup per cupcake).  This is a little tricky as the batter is really thick and sticky.  Bake at 375 degrees for about 18 minutes (mine took 17) or until a wooden skewer inserted in the center comes out clean.  Cool in the pan for a few minutes then remove to a wire rack to cool all the way.

This made a LOT of cupcakes, I ended up with 3 dozen! 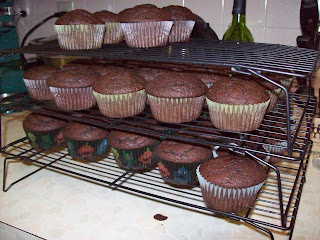 So now we get to the fun part, the frosting.  These would be amazingly delicious with a buttercream frosting or even just by themselves (I left some unfrosted)  but I wanted to do something cute for the pumpkin season so I decided to try out marshmallow fondant.  I have previously made regular fondant and wanted to try something new.  Regular and marshmallow fondants are similar in difficulty (neither is terribly hard, just messy and a lot of kneading) but the marshmallow fondant ingredients are easier to get.

I used a combination of these two tutorials found here and here both found via Stumbleupon.

For marshmallow fondant you need:

I used mini marshmallows.  Put some marshmallows in a microwave safe bowl (a few handfuls or a whole bag, up to you for how much you want to work with) add a couple teaspoons of water, toss the marshmallows in the water until they are damp and kindof sticky, and then pop them in the microwave for 10 seconds at a time, checking at each interval to see if they are starting to puff up a bit and melt together.  At this point they are ready to be stirred.  I suggest a wooden spoon coated in butter or crisco.  Next, add some food coloring to get the color you want but a couple shades darker. (adding the confectioner's sugar will lighten it up.) 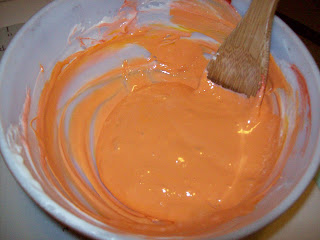 It doesn't look like much now, but this made enough for twenty pumpkins.

The next step is adding in the confectioner's sugar. I added a little to the bowl and had difficulty right away stirring it in.  So instead I greased up my hands and thoroughly coated myself and my work surface with confectioner's sugar and just worked the sugar into the marshmallow goo on the table.  This was messy and took a long time and about 1/2 a bag of sugar, but right at the point where I thought there was no way on earth it was going to work and was about to throw in the towel, it finally became workable and stopped sticking to everything it touched.  (patience...)  In the meantime, to distract my 2 year old want to be helper, this worked 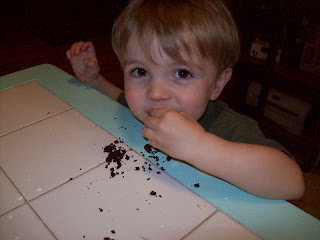 mmm, thanks for the chocolate mommy!

And my fondant worked out to this 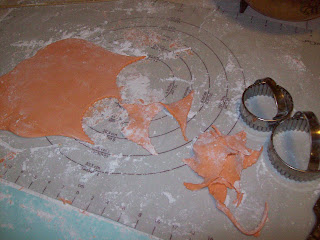 I used biscuit cutters to cut out circles for my pumpkin toppers.  I had two sizes, the larger one worked great for the cupcakes that were more domed on top, and the smaller one fit the cupcakes that didn't get quite as much batter as some of the others (oops! ).  Once I had all my cakes topped with circles of fondant, I used a butter knife to press in the lines for the pumpkin shape. 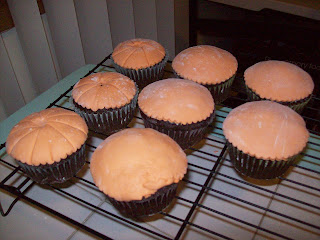 Then I pressed the tip of the knife into the center to make a dip for the stem of the pumpkin.

Unfortunately none of my pictures of the stem making process came out well so I will have to describe it as best as I can.  I got three little cups and put green food coloring in one, large green crystalized sugar sprinkles in another and made some milk/confectioner's sugar mix (glue) in the third.  Then I took a little piece of fondant, rolled it into a small cylinder, and stuck it on the end of a wooden skewer.  I rolled it around in the food coloring, patted off the excess with a paper towel, then rolled it in the sugar sprinkles.  Then carefully pulled it off the skewer, added a dab of frosting glue and stuck it onto the ready and waiting pumpkins!

I think they turned out rather wonderfully! 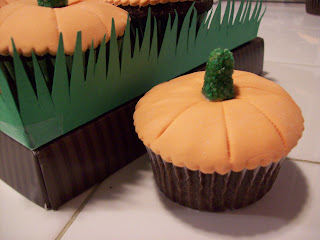 And if you're not a big fan of eating fondant (which, lets face it, most people aren't) its super duper easy to pick off for a chocolaty pumpkiny "muffin"

Hope you enjoyed this month's installment of Sweet 16th!
Posted by Alison at 1:02 PM