Martha Stewart magazines are probably the original Pinterest. Full of too perfect crafts and foods with instructions that always seem easy enough until you're in the middle of them. But the outcome is too irresistible to pass up so despite knowing better, you think 'well maybe this one will be different' and try it anyways.

Anywho, this happened to me this week when I came across a link to a Martha recipe from a few years back. This one.  Lemme just put this in here. If you have any little cuts on your hands, or hangnails, Do Not Try This. Or if you can't resist, do yourself a favor and wear gloves. In all my years working with lemony flavored desserts and such, I have never ended up quite this coated in lemon juice. 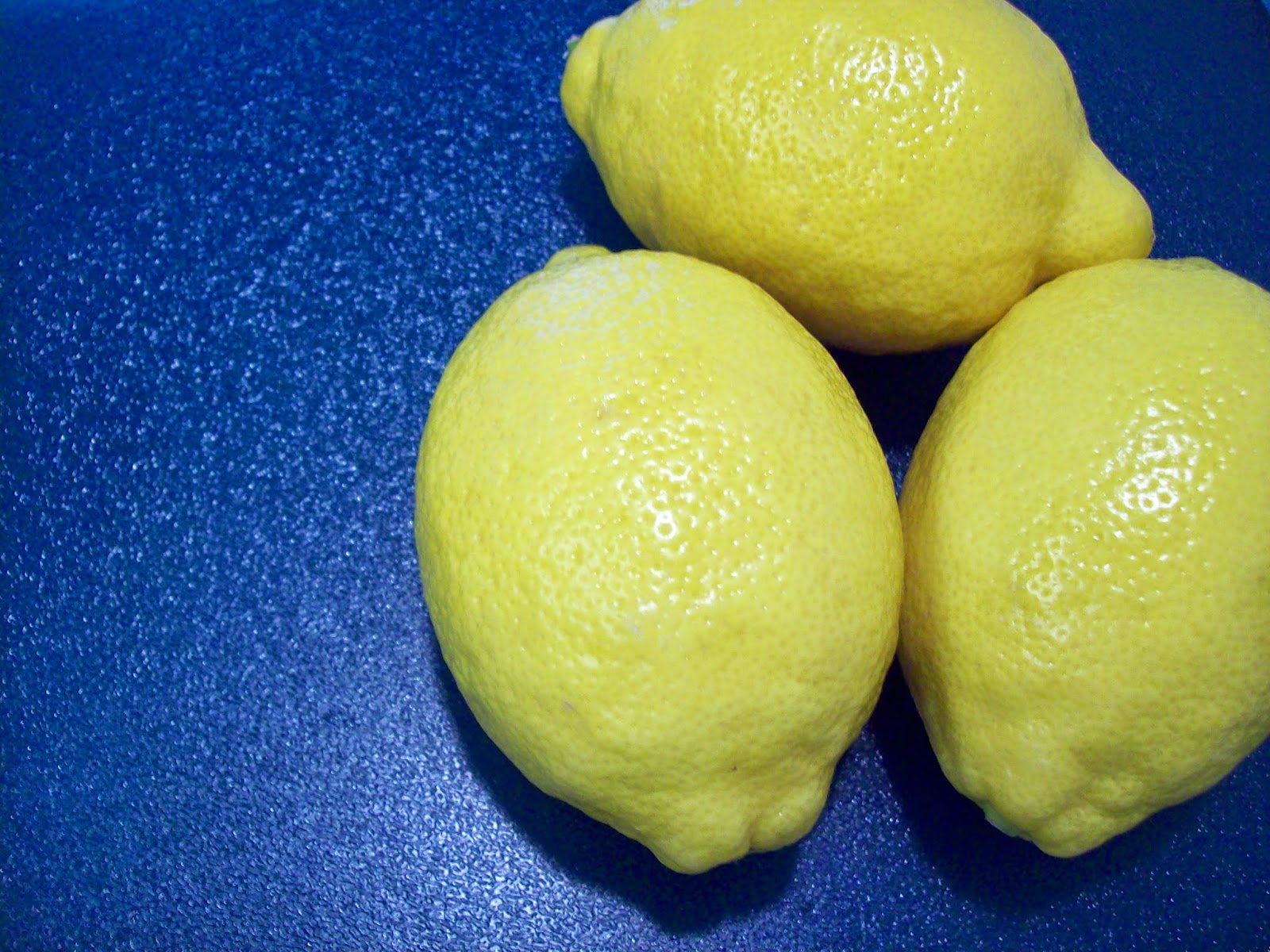 But let's get on with it! The amount of soufflé this makes is enough to fill eight large lemons, but if you don't want that many you can always bake some in small ramekins like I did.

Step one, prep your lemons. Wash them. You'll be eating out of them so really it just makes sense. Next, cut off the nubby end of the lemons so they can sit upright without assistance. 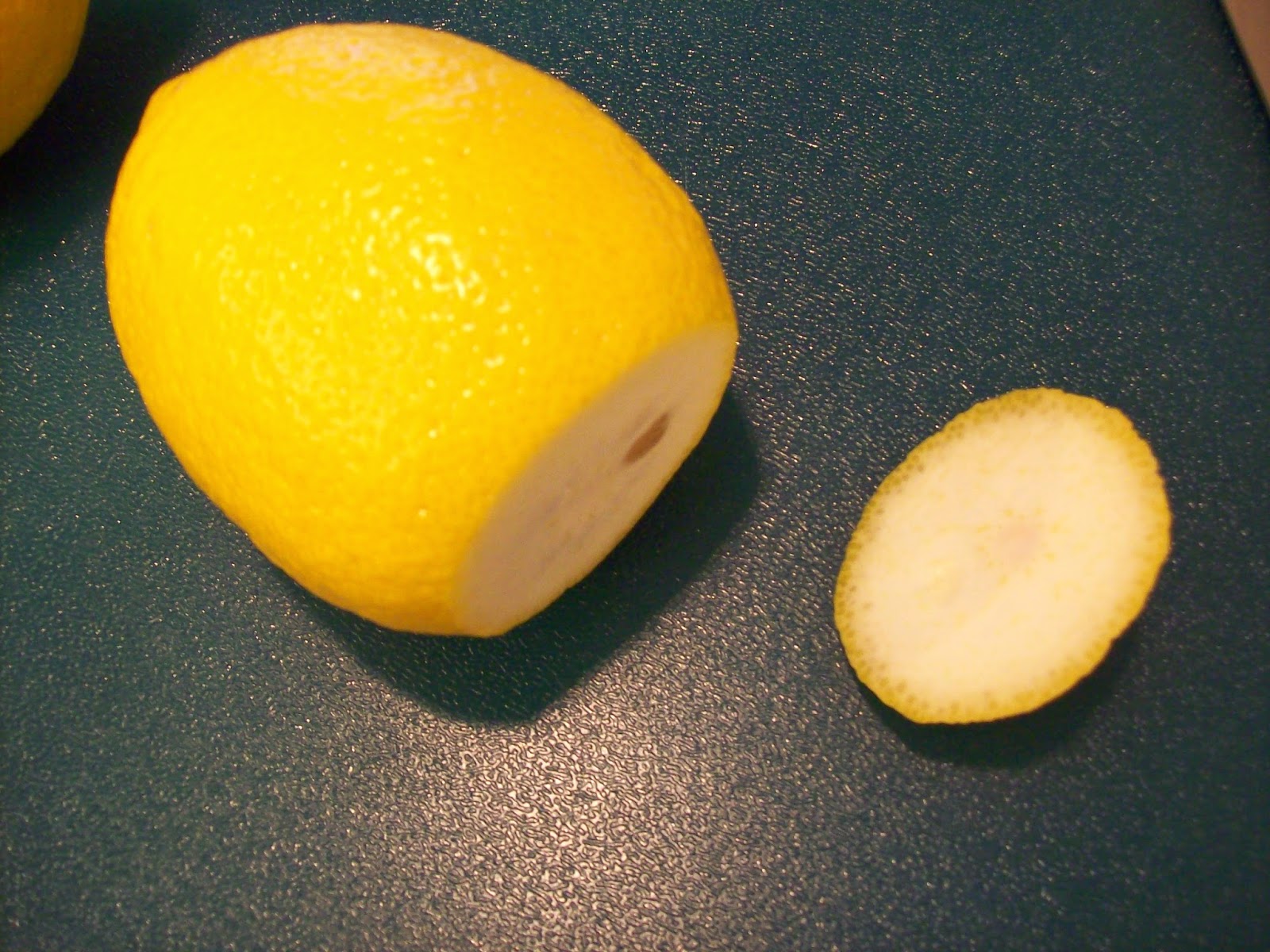 Make another cut at the top of your lemon, parallel to the first, so you can scoop out all the insides. 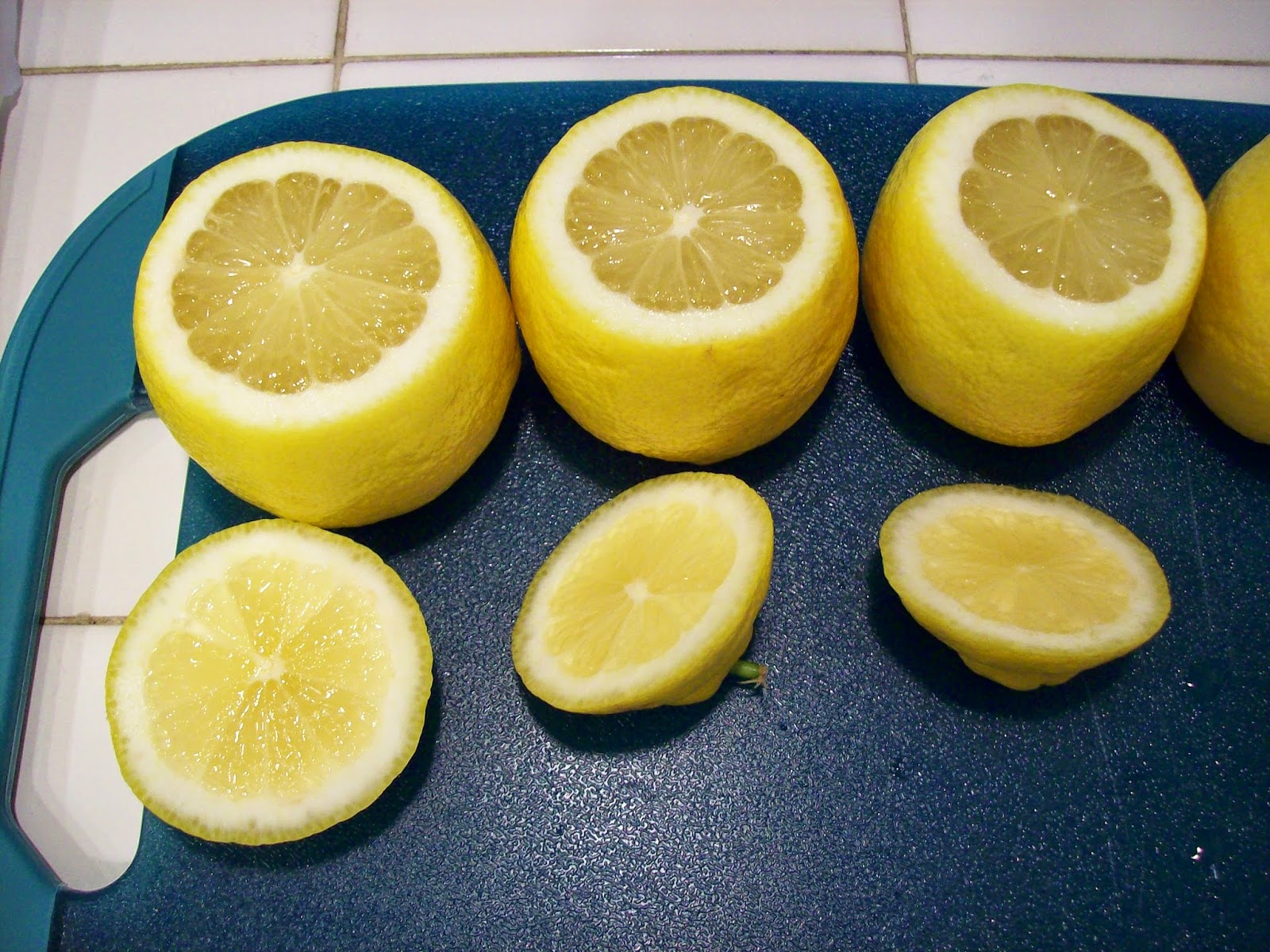 Now the tricky part. Hint: this is where you get covered in lemon juice. Scoop out the insides. The Martha recipe recommends a melon baller or a grapefruit spoon. Hah! A grapefruit spoon may have worked but I don't have any. What I ended up doing was using a very sharp knife, I cut around the opening between the lemon flesh and the pith about an inch deep. Then I used the melon baller to scoop that out and to gouge the rest out. The inside wasn't pretty but the top lip was and that's what matters right?

Here's what they looked like after being scraped out. Make sure to get all the seeds out! 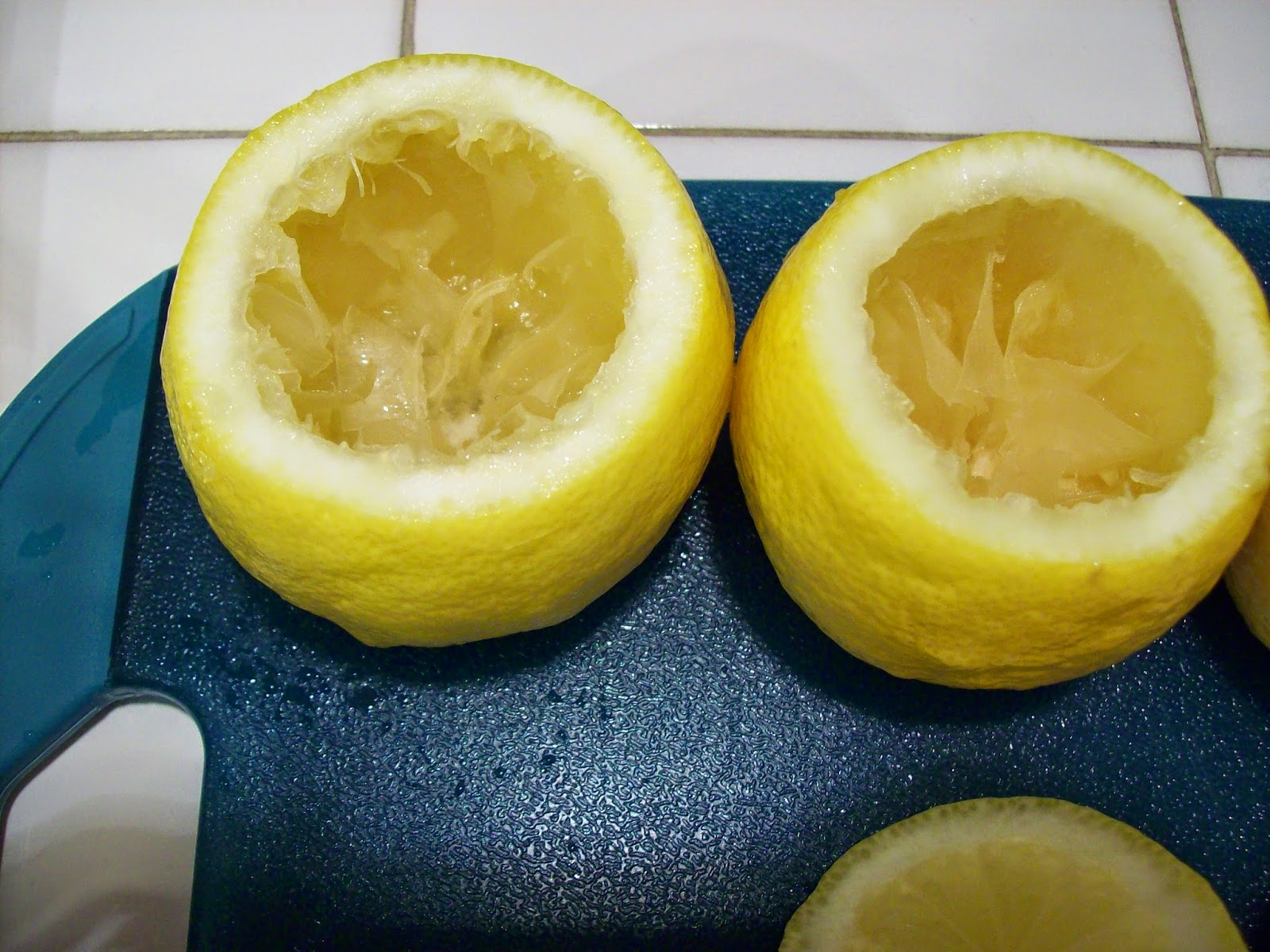 Also, save the innards by scraping them into a sieve over a bowl. You want that lemon juice! 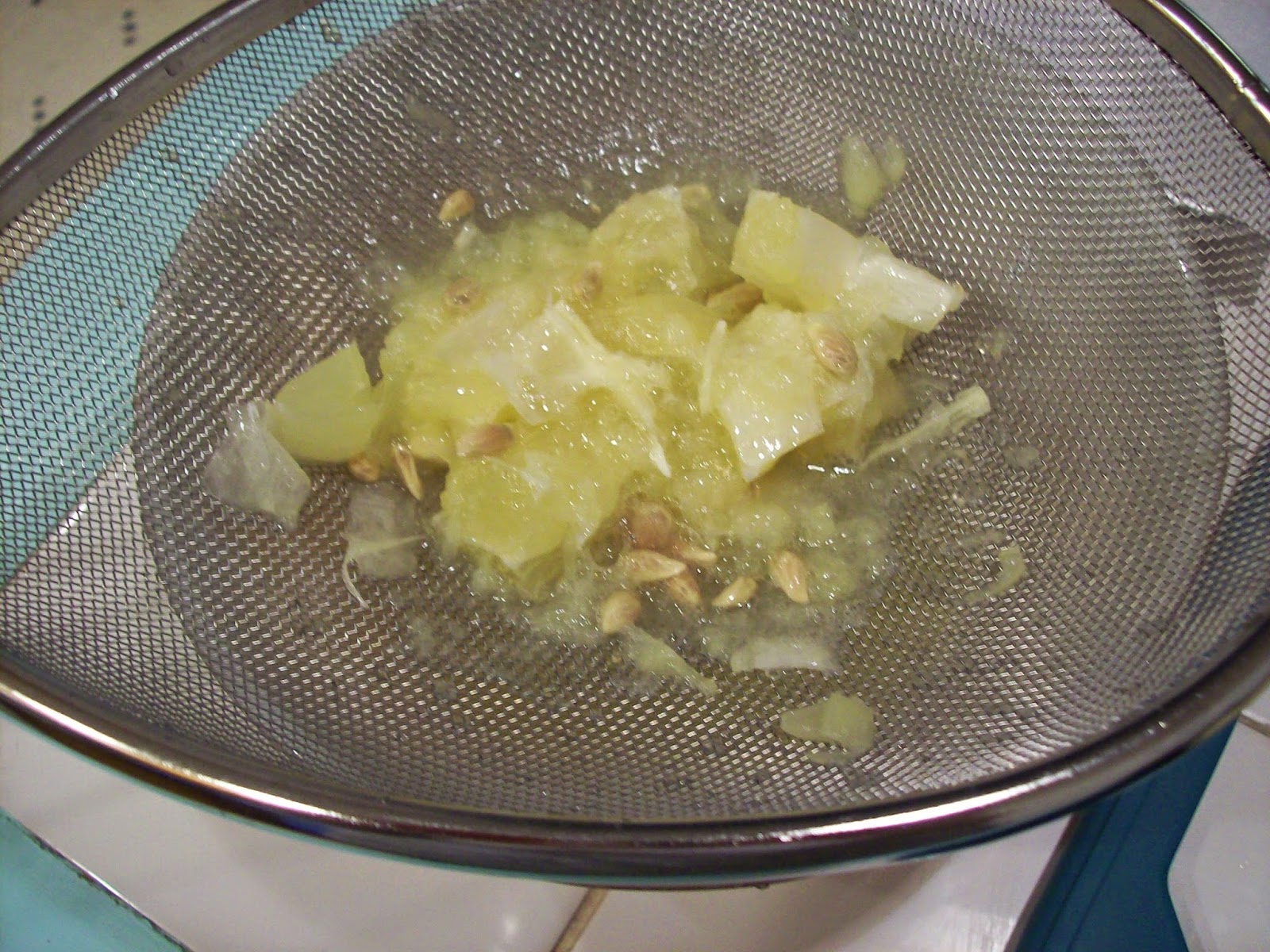 I'm sure it's pictures like these that started the trend of only showing the finished product rather than the process. Lemon guts just aren't very pretty.

Now that your shells are prepped, it is time to make the soufflé. In a heat-proof mixer bowl, beat together (on medium) the egg yolks, 1/4 cup of the sugar, 1/4 cup of the lemon juice you saved, and the flour using a whisk attachment. After a few minutes it should be a pale yellow. 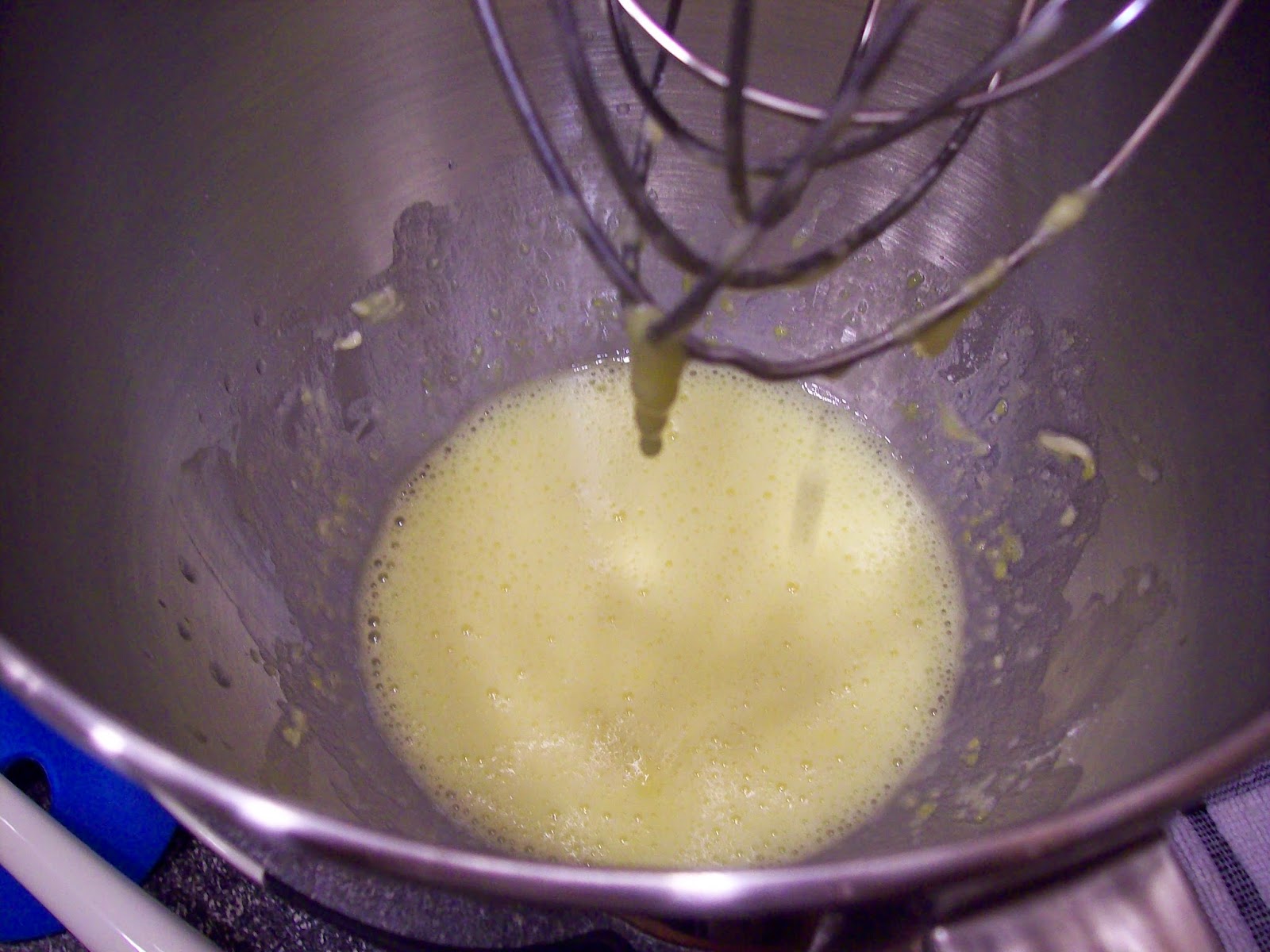 Like so. Place the mixer bowl over a pan of simmering water and whisk constantly for eight minutes. The mixture should get quite thick. Put it back on the mixer and whisk until it has cooled down, scraping down the sides of the bowl from time to time. Transfer it to a medium sized bowl. It should look like this when you're done. 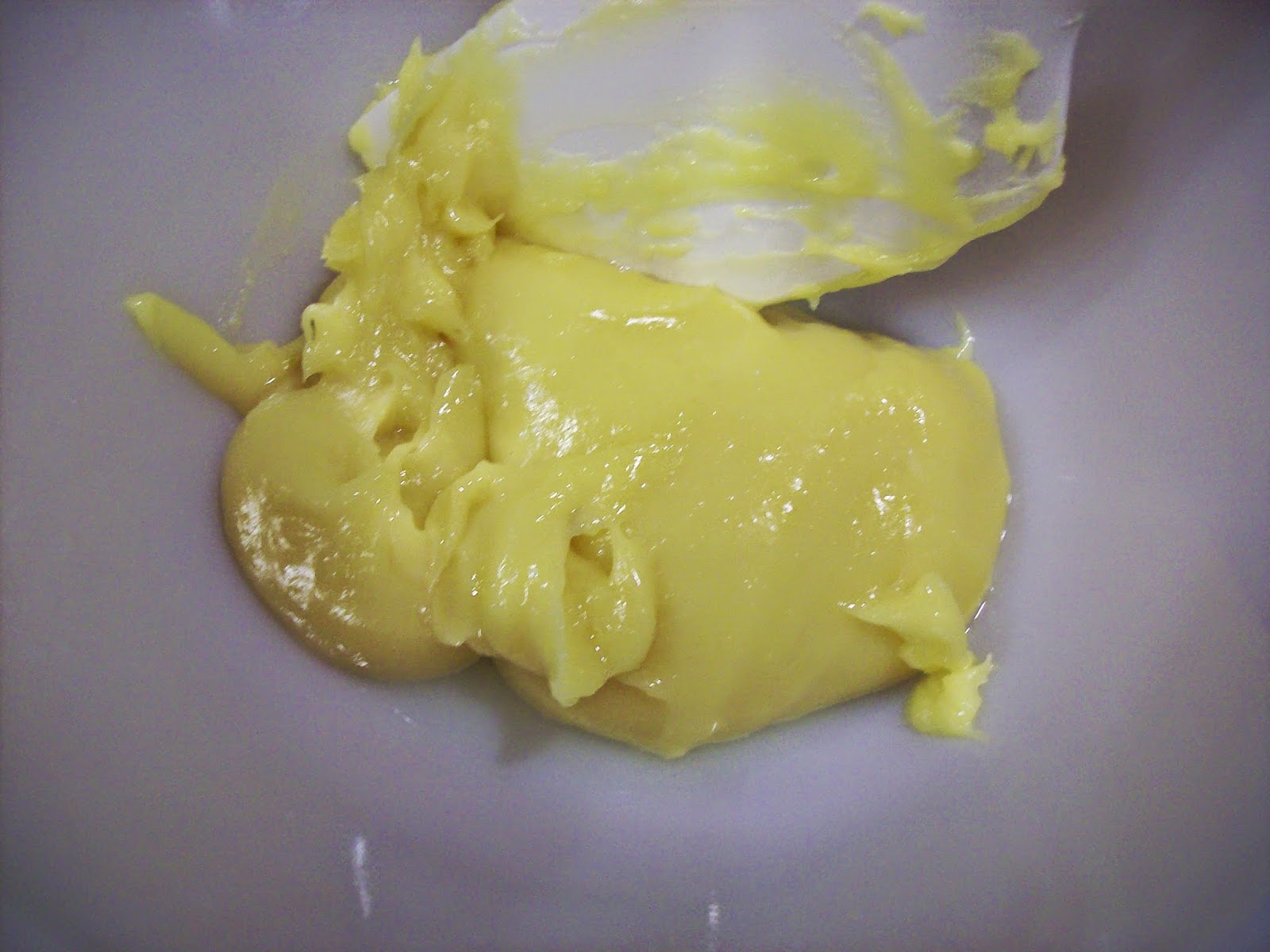 Next up, in a clean mixer bowl, combine the egg whites and the remaining 1/4 cup of sugar. Place this mixture over the pan of simmering water and stir until the sugar is dissolved and the mixture is warm. Don't over-do it or the egg whites will start to cook. 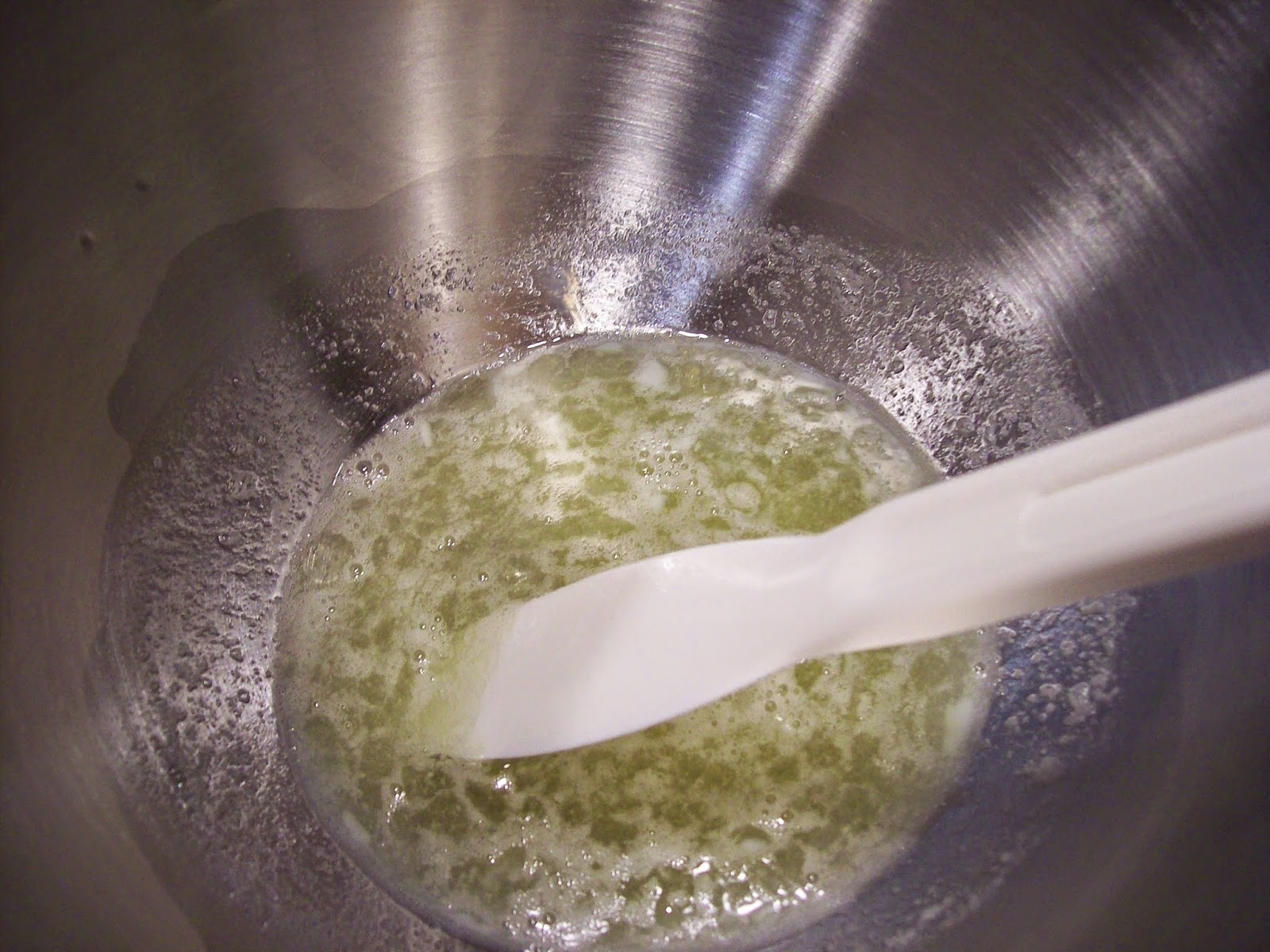 Put it on the mixer and whisk on low speed until frothy. Then increase the speed and whisk until it is shiny and holds soft peaks. Stir about 1/3 of the egg white mixture into the egg yolk mixture, blending well. Then gently fold in the remaining egg whites. 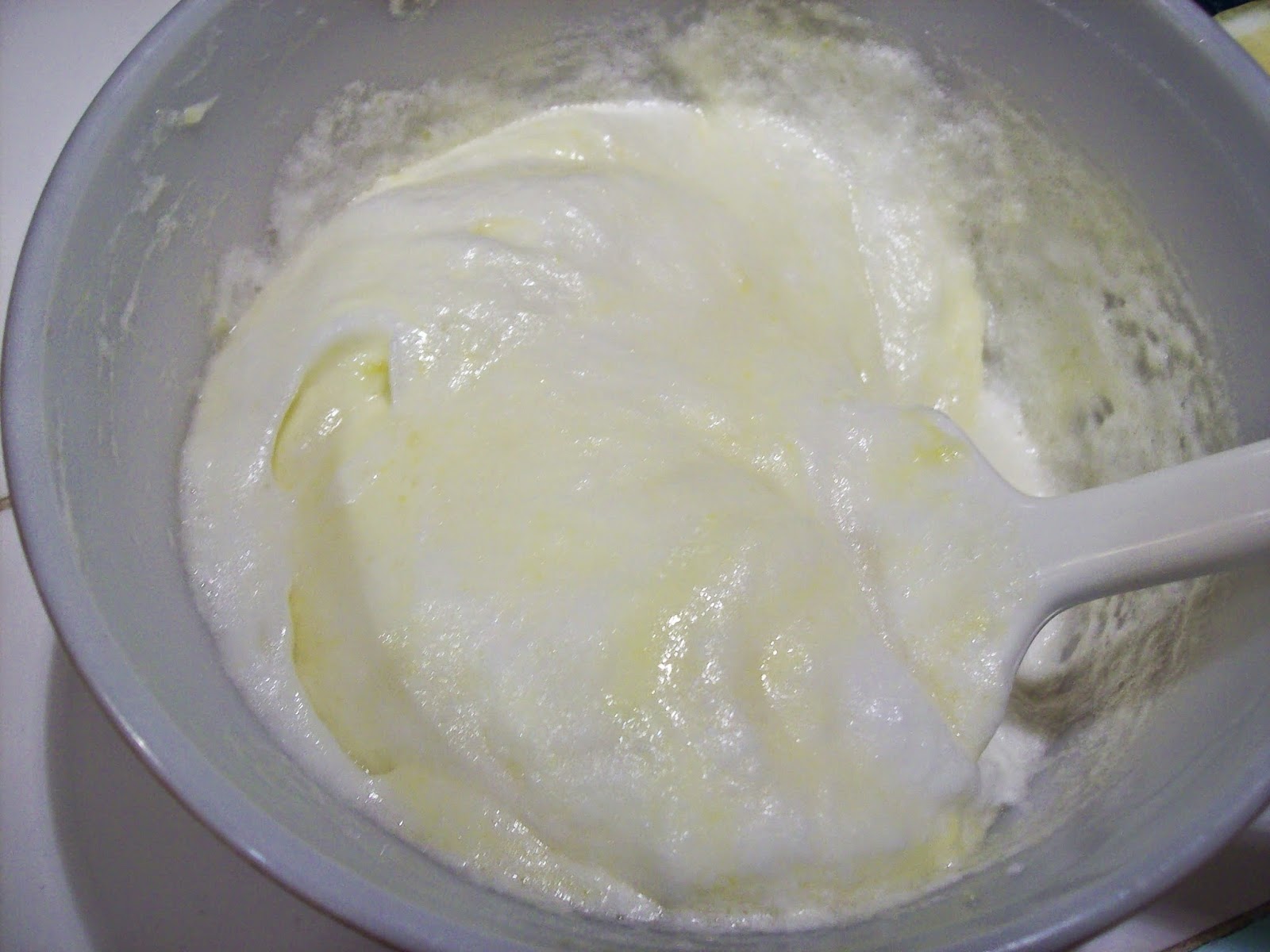 Place your prepared lemon shells on a baking sheet lined with parchment paper. Fill them carefully to just below the brim. 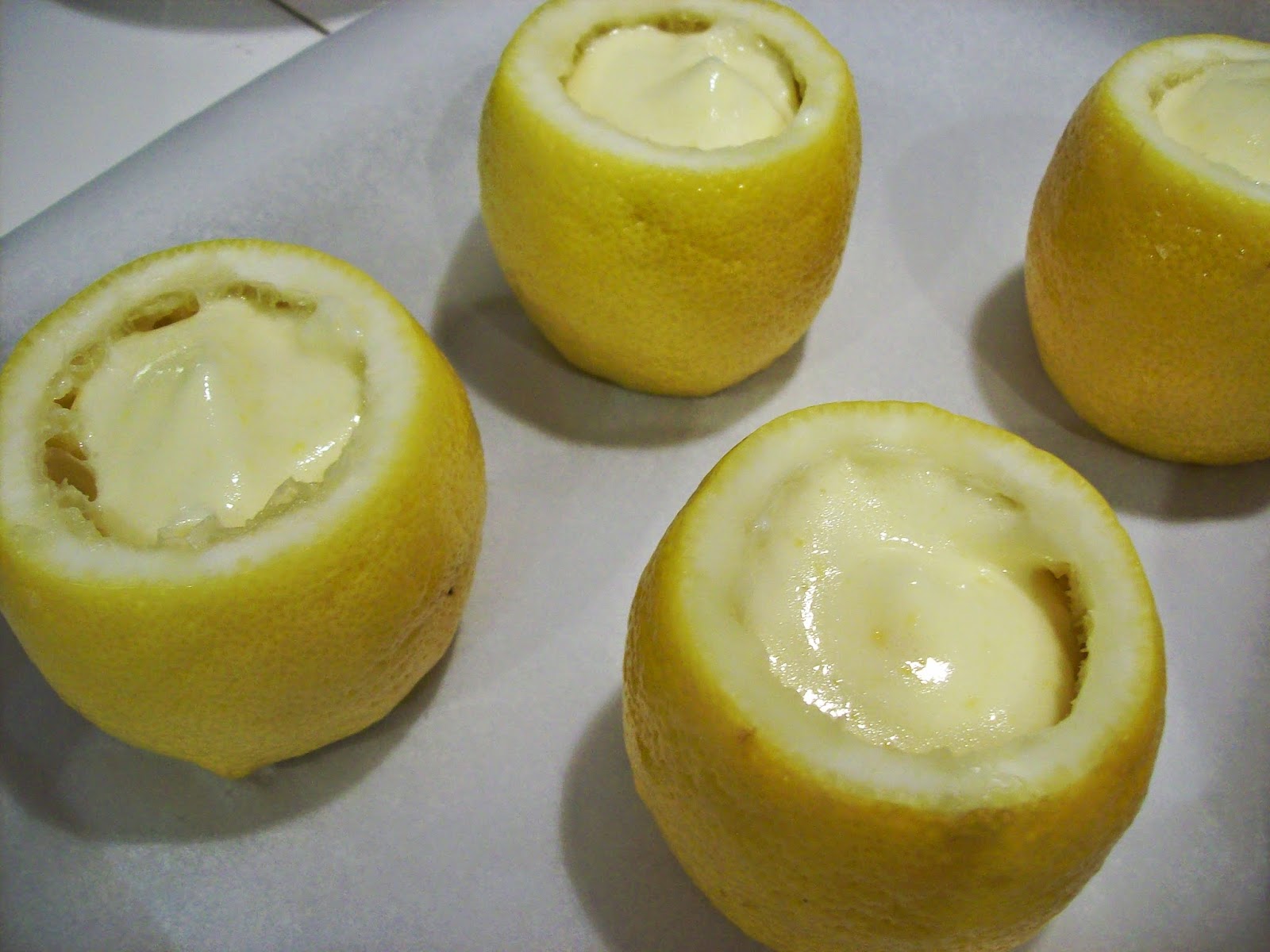 Pop them into a 350 degree oven for 14-16 minutes, or until the soufflé has risen about an inch and the tops are just starting to tan. 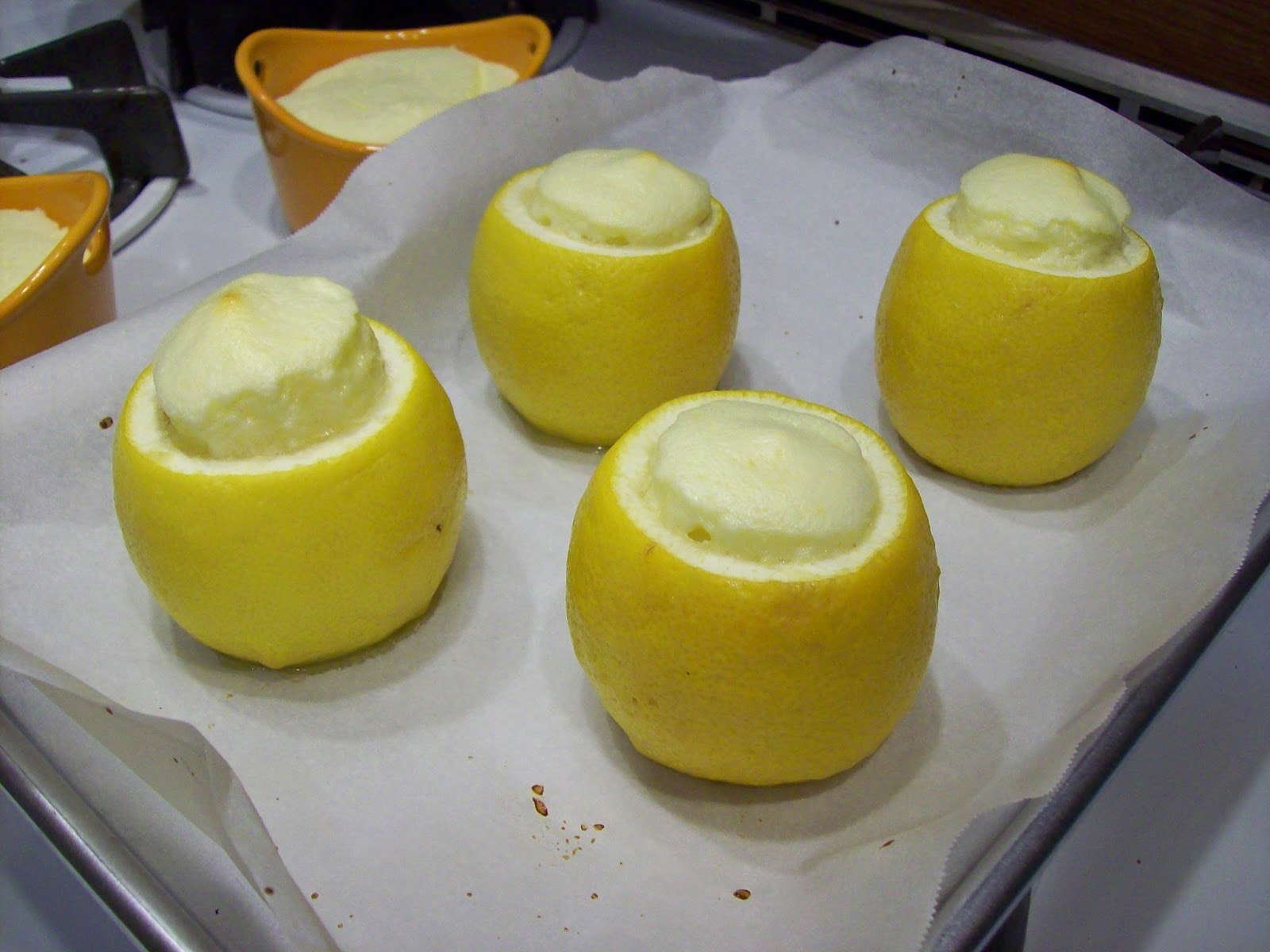 Here you can see I didn't fill them all evenly, oops! But you can also just see the two ramekins in the background so that shows how much this makes aprox. 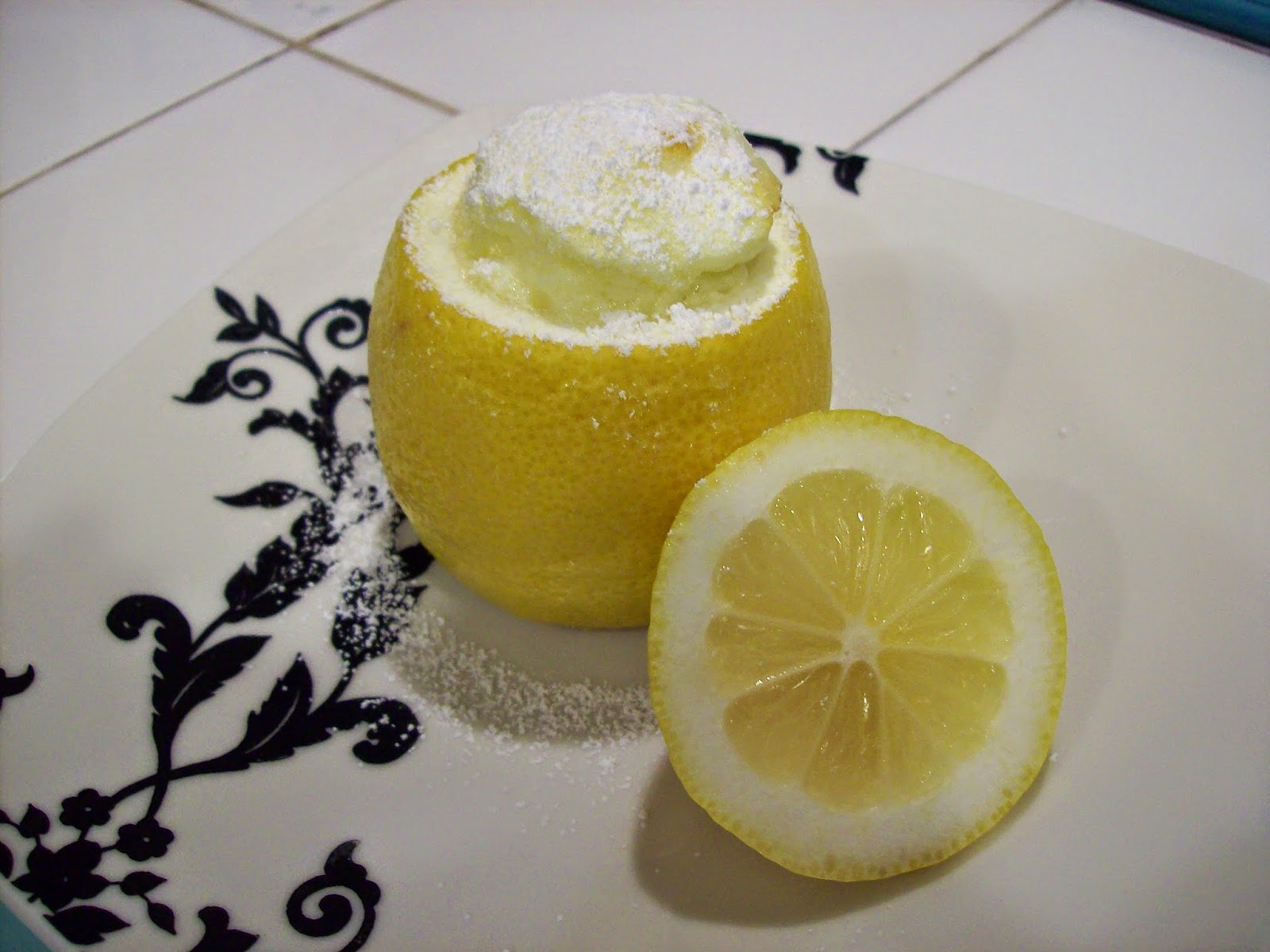 
So these are relatively simple once you get past the scooping out of the lemon innards part. And so so so delicious. I think I like them better then lemon bars! The only thing that could make them better is a shortbread cookie stuck in the top.

The top part has a very slightly crisped coating, like when you roast marshmallows and peel off just the outside layer. Then the part inside the lemon is extremely juicy from being baked in lemon juice. You need a spoon to eat these, and you might find yourself picking up the lemon peel and drinking any juice you couldn't get.

So go forth and bake! And then report back and tell me I'm not the only one who covered my kitchen in lemon :P