So remember when I posted this?   Well, I finally got around to doing something with that pumpkin!  I found this recipe on NPR that was for stuffed savory pumpkin and had to try it (or, something like it at least).  So I carved up my pumpkin and got to work.

Here's my pumpkin all cleaned up: 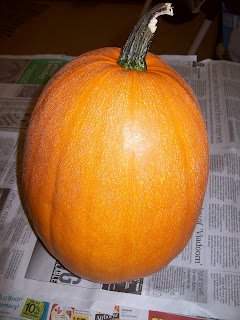 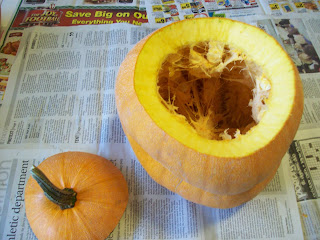 and ready to be cleaned out.


I got all the stuff together that was going into the pumpkin: 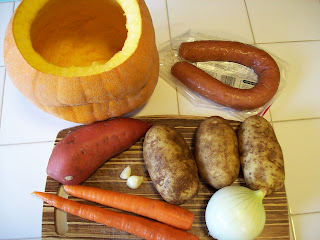 To this I also added spices (in unmeasured amounts salt, pepper, Italian spice and nutmeg), some cream and a bit of mozzarella cheese.  I stirred all of the ingredients in a separate bowl and then packed it into the pumpkin. 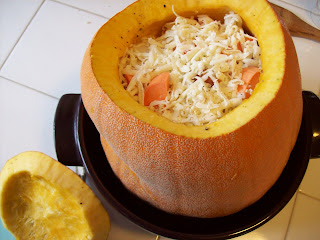 Then I put the lid on: 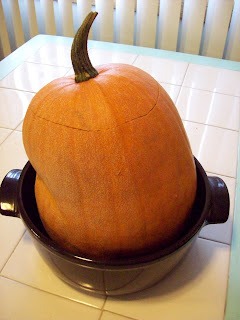 and attempted to put it in the oven.  At this point I discovered that it did not actually fit in my oven and I had to cut off the stem.  Not a big loss really as the stem was rather prickly.

So I was following the recipe which was for a pumpkin about 4 pounds in weight.  My pumpkin was closer to 8 pounds.  So after about 2 1/2 hours of baking at 350 degrees, the pumpkin was perfectly done but the stuffing inside was not.  It was at this point out of desperation and hunger I removed the stuffing and baked it by itself.  Then I re-stuffed it : )  (cheating I'm sure).  But it sure looked nice: 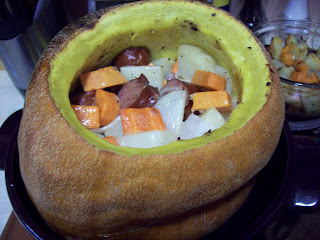 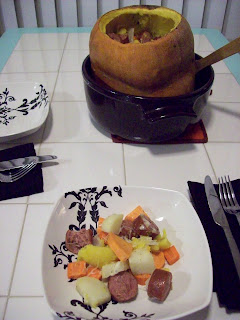 This was all well and good for serving but I couldn't very well stick an entire stuffed pumpkin in the fridge, so I took the stuffing out (once again) and scraped out the flesh of the pumpkin: 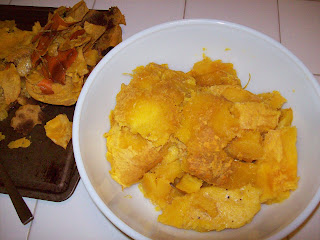 At last I had an excuse to use my hand blender in order to blend up the pumpkin: 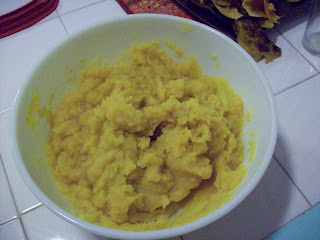 Now I will have to re-visit this pumpkin cooking challenge again.  I think I ended up with something close to 5-6 cups of pumpkin puree.


Sorry for the picture heavy post with a severe lack of actual baking instructions.  I'll be back soon with an update on those little birds.
Posted by Alison at 6:36 PM